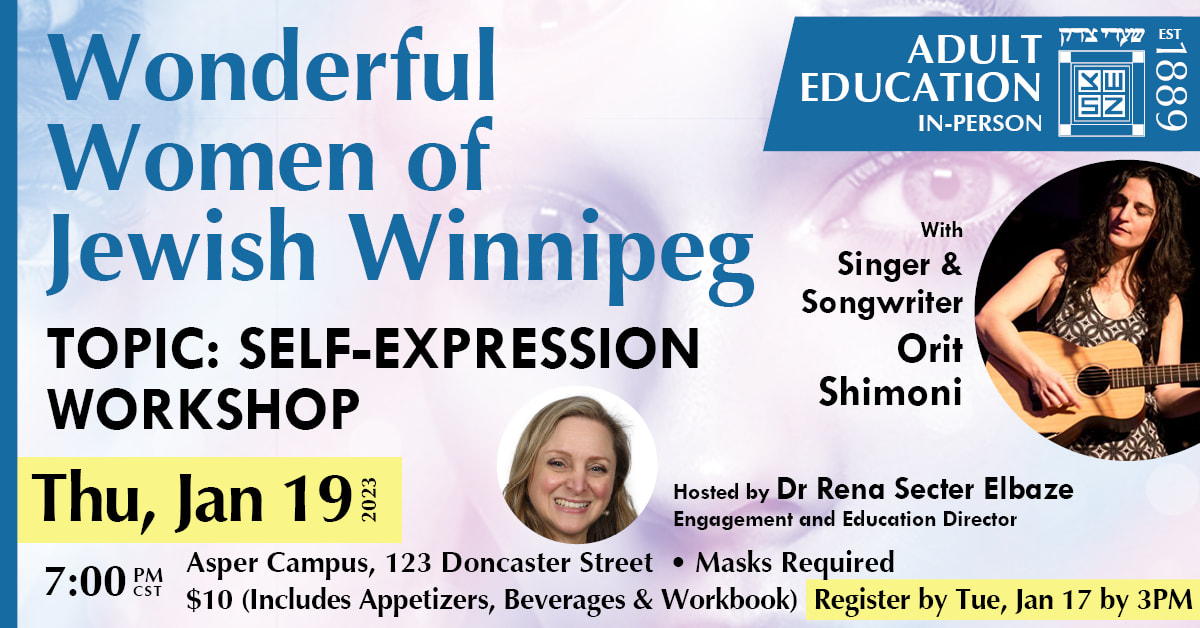 The Wonderful Women of Jewish Winnipeg is an inclusive gathering for women from diverse backgrounds to share their unique experience and perspective. Join us for learning and discussion as we explore strategies for surviving and thriving within the challenges of modern living, Inspired by Jewish wisdom.

Session: Self-Expression Workshop with Singer songwriter Orit Shimoni
From King David to Leonard Cohen, songwriting has offered a window to the soul offering a means for self-expression and dealing with life’s challenges. Singer songwriter, Orit Shimoni will guide participants through the exercise of writing a group song for an inclusive, empowering, and uplifting experience.
Thursday, January 19, 2023 at 7:00 PM
In-Person at the Asper Campus
123 Doncaster Street

The first of what I hope are many "safe music spaces" performances happened on January 7th.  This was an absolutely joy-filled, love-filled event for me and the extraordinary audience.  My heart is so full.  To find out more about Safe Music Spaces, you can check out the new website.  SafeMusicSpaces.com 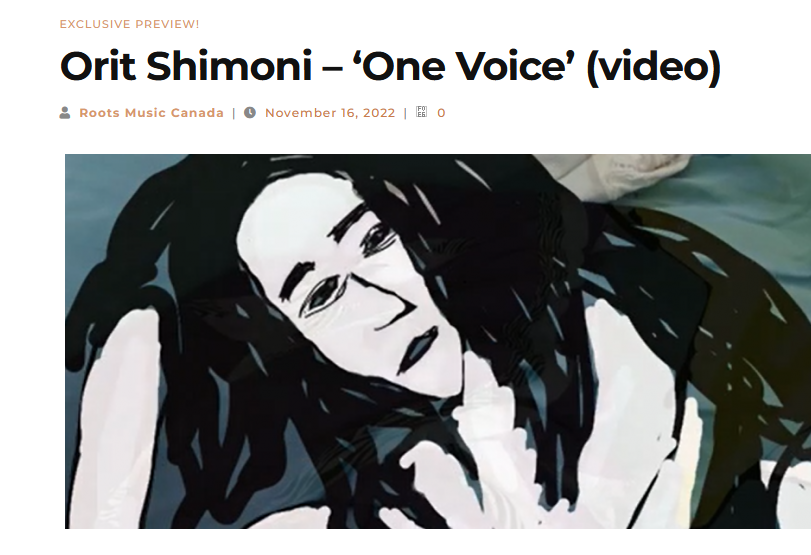 Roots Music Canada gave an exclusive preview to my new animated music video for the song "One Voice!"  Here's what they had to say:

"We’re super excited here at Roots Music Canada to premiere a new video by Orit Shimoni that has literally been more than two years in the works.
It’s a video for her song “One Voice” that she drew and animated herself — a project that, like so many we’ve seen and heard over the past two years, might never have happened were it not for the COVID-19 pandemic.
COVID hit all artists hard. Tours were cancelled. Albums were put on hold, and artists found themselves making ends meet by teaching music online, taking unrelated jobs or recording from makeshift home studios.
But Orit didn’t have a home.  She’s been famously nomadic for more than a decade.  So for her, the pandemic meant she was literally stranded.

“I had just arrived in Winnipeg to play a couple of shows and only knew a couple of people here, and then BAM! Trains cancelled, everything cancelled, and nobody knew for how long,” she said over Messenger.
“I was taken in by a couple that hosts house concerts in town and slept and wept in their basement for what ended up being two months, before moving into another friend’s spare room, and then eventually renting an apartment when I realized this situation wasn’t going to blow over.”
Unable to move forward, she decided to “expand laterally,” she explained in a statement about the video.
She had always wanted to try painting but couldn’t do it while living out of a suitcase, so she welcomed the opportunity to start as something of a consolation prize for not being out on the road.

She’s been sharing her work digitally every since then, but she didn’t tell anyone that she had also embarked on an elaborate animation project for which she drew hundreds of carefully-planned frames.


“The technology was affordable and available and cool,” she explained.
“But this was going to take a long time, and I wasn’t sure if I had what it takes to see it through and finish it, so I didn’t say anything, in case I didn’t.”
“One Voice” felt like the perfect song to animate, she said, because, although it was written a few years ago, it speaks to the anxiety many people have been feeling, trying to reconcile the past, present and future and undergoing such a sudden and massive shift.
“But you get up every day and do your best anyway, embrace the uncertainty and proceed, and I love that this video shows that resilience,” Orit said.
Speaking of resilience, Orit demonstrated it in another way, recently: she got her drivers license, a response to another blow to her nomadic lifestyle:  Greyhound Canada’s decision last year to suspend its Canadian operations.
Congratulations, Orit!"

Thanks you!!  You can enjoy the video on my videos page, or by subscribing to my Youtube channel! 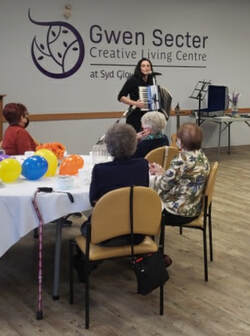 I had the honour and privilege to perform for a group of 22 Holocaust survivors. To hear them singing along was deeply moving. What a testament to resilience and survival, and how fundamentally inspiring.  Everything I do as a songwriter and performer is about taking the cultural inheritance we have been given and transforming the painful aspects of it into beauty and love. The amazing people do it by living.  So grateful for this experience. 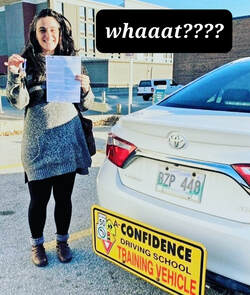 Right before I went on the road full-time, a Canadian touring artist whom I’d confided in about my plans to go full-time said, “there’s no way you can do it without a car.”
Well – I did it anyway. For eleven years straight. If you’re gonna tell me I can’t do something – and it’s something my soul needs to do, then I’m gonna find a way to do it.
And then, eleven years in – public transit disappeared.
First because of bad business. Then because of a globally catastrophic, deadly pandemic (which by the way, is still happening, wear a mask!).
Within a week into everything shutting down, utterly and fundamentally stranded, scared and devastated, I knew pretty damned clearly that the only way I was ever going to get any control of my musical life was to finally do this thing that had always dangled in my future like some vision I doubted I would ever get to. It’s amazing the way desperation can be such a tremendous motivator.
But………. I still put it off for two years because…………. I was terrified.
This past June I started taking driving lessons, and slowly but surely (and with no shortage of tears and a lot of laughter, my instructor was a gem and a riot, he deserves a medal of bravery and a book deal), I finally had my first road test on Friday,
AND I PASSED!!!! I PASSED MY FIRST TEST!!!
I HAVE A DRIVER’S LICENSE!! WHAAAAAT?? NO, REALLY, I DO!!! I HAVE A DRIVER’S LICENSE!!!
It still feels totally surreal, but immediately I am flooded with the possibilities of a million new ways that I can now live my life. Which is pretty fucking awesome at forty-four years of age. I no longer feel stuck.
I didn’t know if it was possible. Everyone told me it was, in theory, but inside I truly wondered if it was for me.
I’m not exactly ready to buy a car and jump in and zip around the country, but I’m the-biggest-step-I’ve ever-taken-to -that closer than I have ever been.
If you’re gonna tell me I can’t do something – and it’s something my soul needs to do, then I’m going to find a way to do it.
Now, I will happily accept donations toward my first tour-mobile. Or maybe someone has a vehicle they just really want me to have?
P.S – told you I was up to all sorts of stuff!   BEEP BEEEEP!
Stay safe out there!! 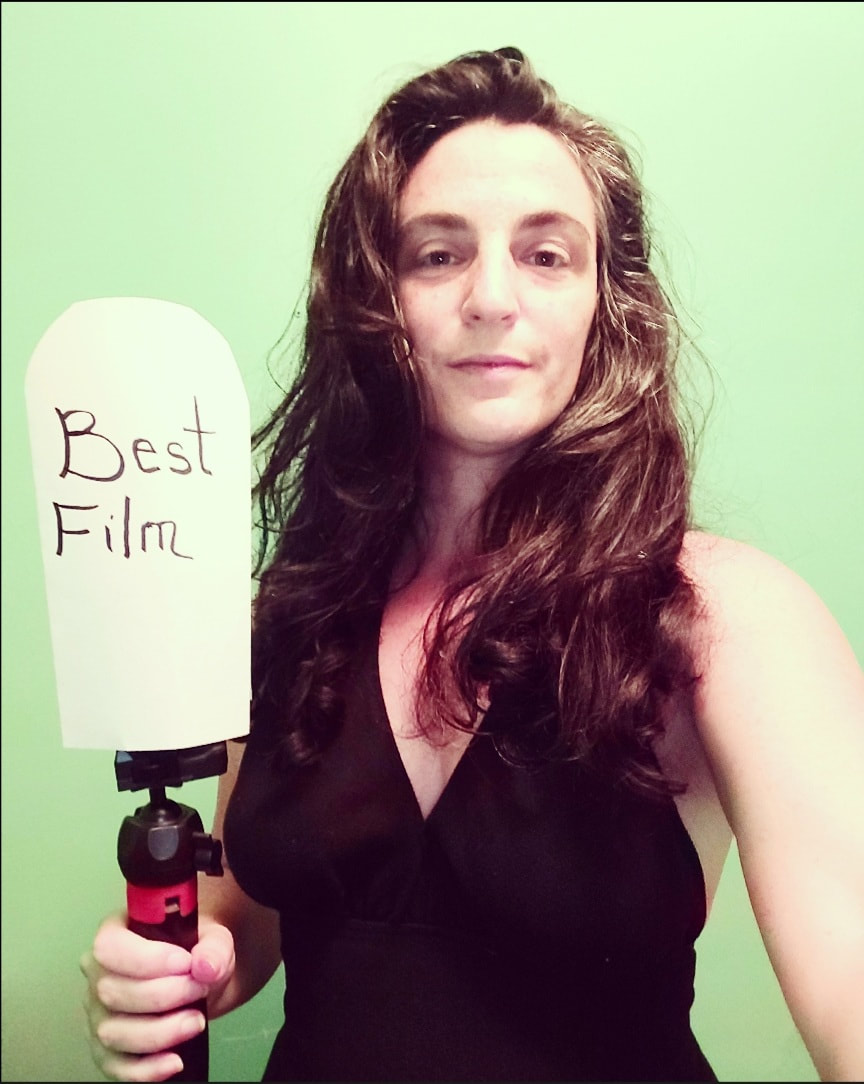 I was supposed to be on a free flight to Serbia, welcomed by delegates at the airport, driven to a free hotel room, and attend a film festival where I would be accepting an award for a film. A film by my beautiful, funny, talented friend Josh Dunn, which I co-produced, co-directed, and edited, called Our Hearts Aren't Disabled.
How amazing!!! How exciting!!!! And what an honour!!
But it was too risky to go. Three flights each way, three airports, no more masks, case numbers exploding everywhere, and if I’m sick in Serbia and have to miss the free flight home, I’d have to come up with at least 2,000 for a way back, and a hotel room for god knows how long while I isolate. And god forbid I should get anyone else sick. It was a brutal decision. But it was the right one. It was the only one I could make.
It broke my heart not to go. It would have been such a thrill to represent this film and meet other film-makers, and speak about this incredible thing my friend and I created, with the help of very amazing people.
But as bad as I feel, hear this clearly: I was going because Josh couldn’t. Josh couldn’t go because he is too disabled to go to a “Disability in Film festival.” Can you imagine how HE feels?
My friendship with Josh, and working on Our Hearts Aren’t Disabled, hearing not only his voice but the voice of other people living with disability in his community, opened my eyes and heart in ways I didn’t foresee, and gave me insight I could never have otherwise had. This film has now been celebrated and showcased in a number of film festivals, and screened in university classes and events. It deserves attention and I want every single person I know, and every single person I don’t know, to see it.  If you have a group of people you would like to show it to (A classroom, a community), please get in touch with us.
Hearing people’s stories first-hand is the only way to figure out how to make this world better.
I love you, Josh. I’m proud of us.
Excited to be performing at this year's Trout Forest Music Festival! 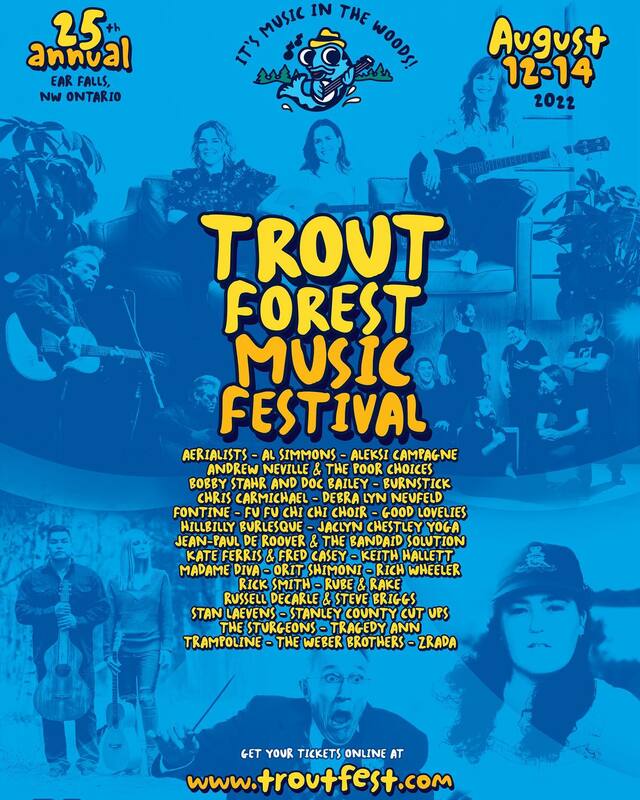 What an absolute thrill to play the Winnipeg Folk Fest, 2022 - an unexpected set with the one and only Dan Bern. Sweet summer surprise!
May 25th at the Park Theatre, with Belle Plaine and Scott Nolan -
The Park Theatre & Wits End Presents
The Storytellers –
Every Song Paints a Picture, Every Picture Tells a Story

I'm excited beyond words to be playing Winnipeg's fabulous Park Theatre this April, with some very wonderful guest musicians!    You can order tickets here:  www.eventbrite.ca/e/orit-shimoni-tickets-293881817427?fbclid=IwAR2YUQBOoq4NscU0dbjv5d6YLcyULvXvq1CGVNkE07sY5TlCJzjOkR7aRYk 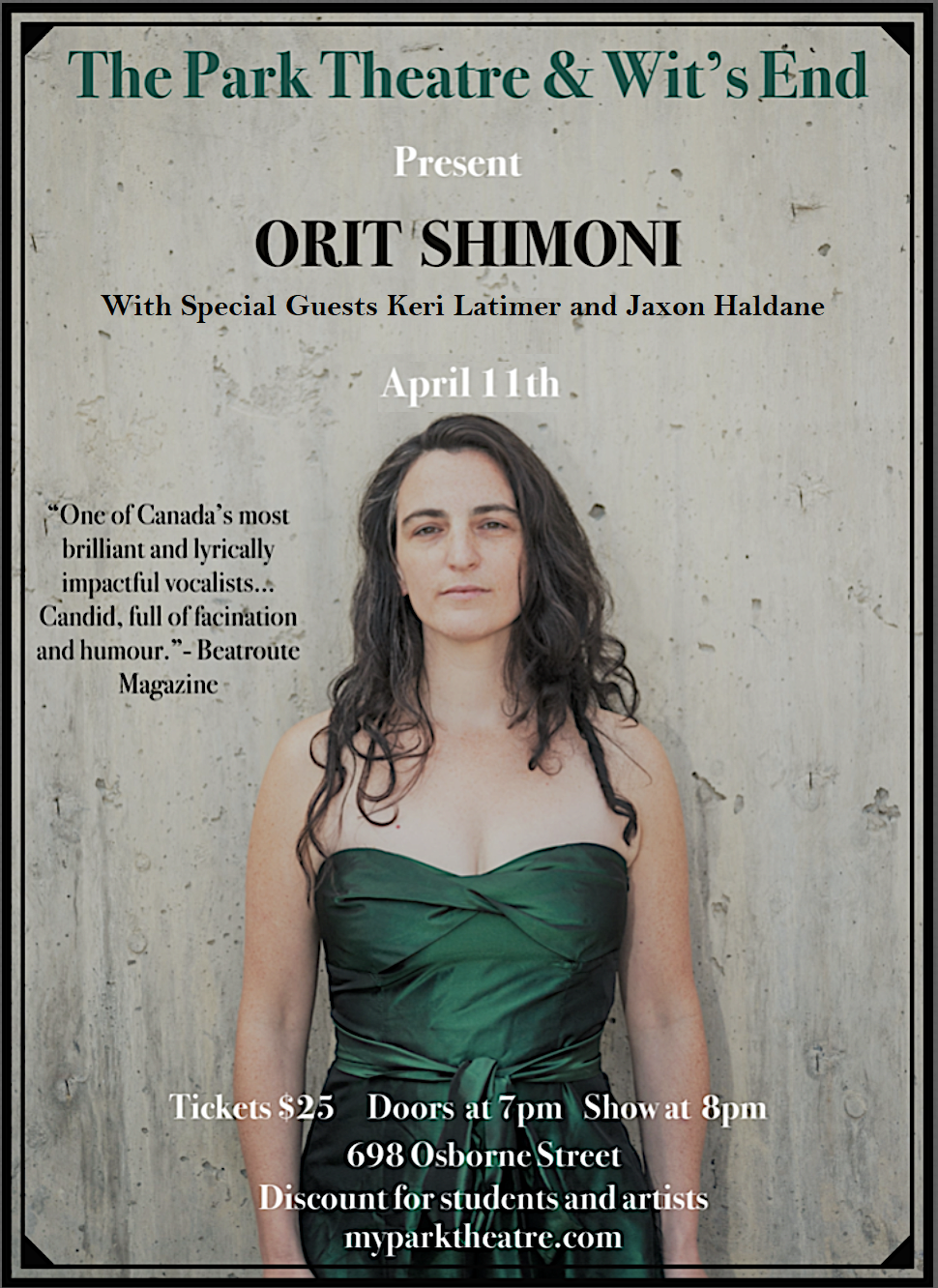 Happy 2022 Everybody!!!
As things remain in the air and safety measures come and go, I want to wish you all a fruitful year ahead in spite of the obvious challenges.
I am hunkering down for the most part in Winnipeg, riding out this latest wave, and working toward completing this incredible album I began writing and recording when the lock-downs began in 2020. I can't wait to share it with you all.
I am also continuing work on my road memoir and am thrilled to have gotten involved with Stories to Songs once again, working with a fabulous senior to help turn her life-story into a song.
My album Lorem Ipsum, which I put out last spring, is getting its international radio play and has received some incredibly moving reviews, which still feels like its own little miracle - what we can do in solitude, under duress, and how it can still reach the hearts and minds of others.
I have released a new EP called Cockroach in the interim...
which you can find on my bandcamp page.
I have performed an incredibly exciting self-written show called "The Wandering Jew" - a retrospective of my music as it pertains to my Jewish identity, performed at Winnipeg's Tarbut festival with the fabulously talented multi-instrumentalist Paul Balcain.
Tentative tour dates for the spring, but until then, staying safe and healthy is the key.
Be well, and stay tuned!
The future is full of possibility!
- Orit 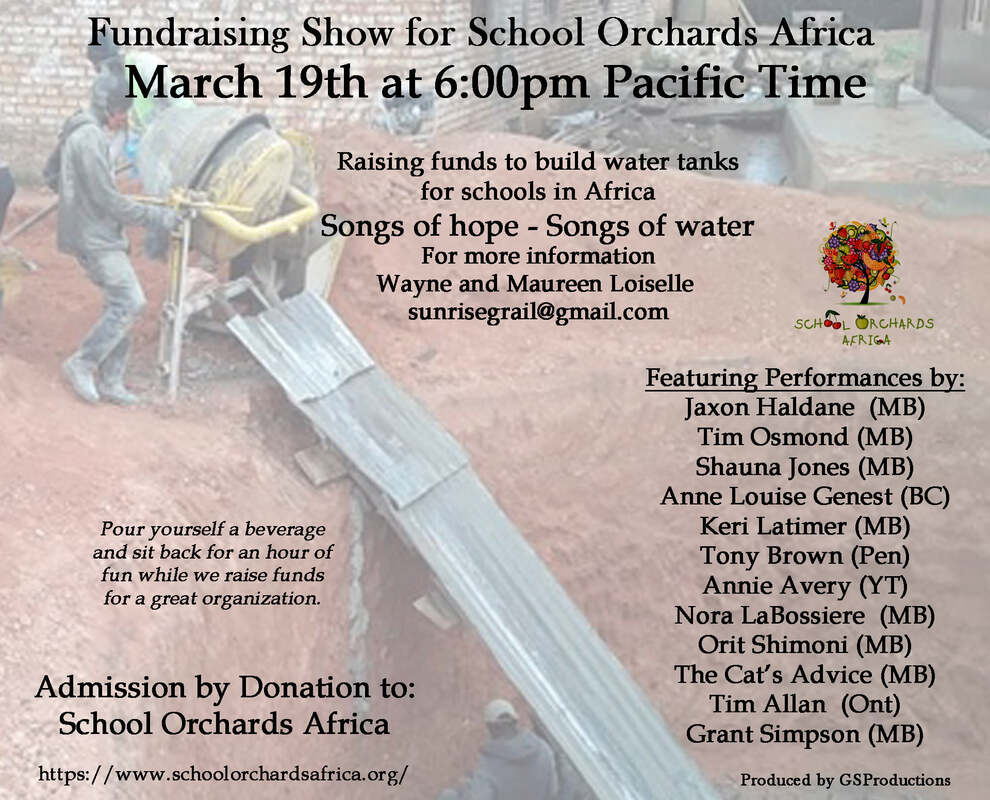 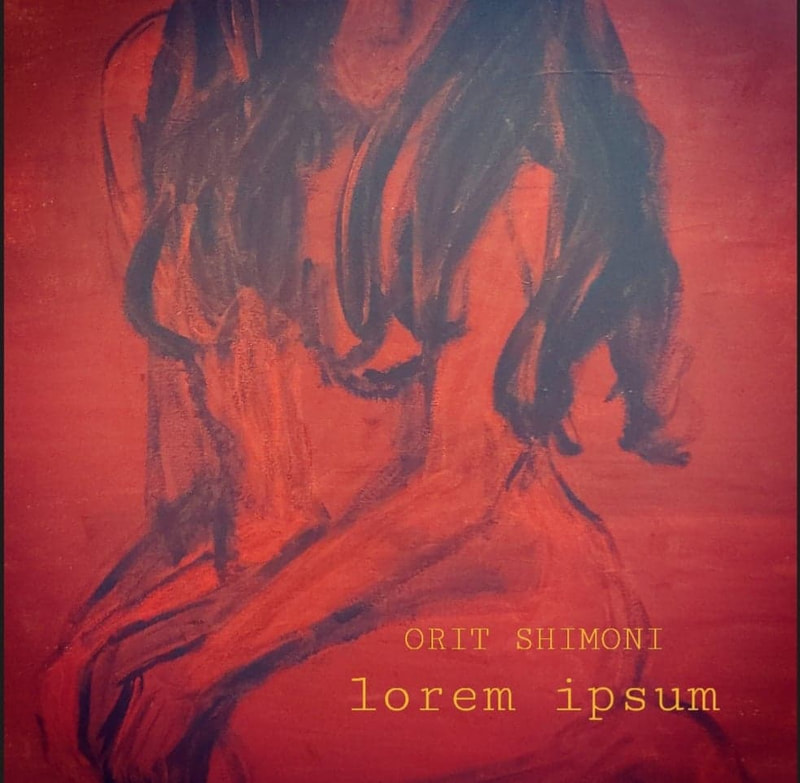 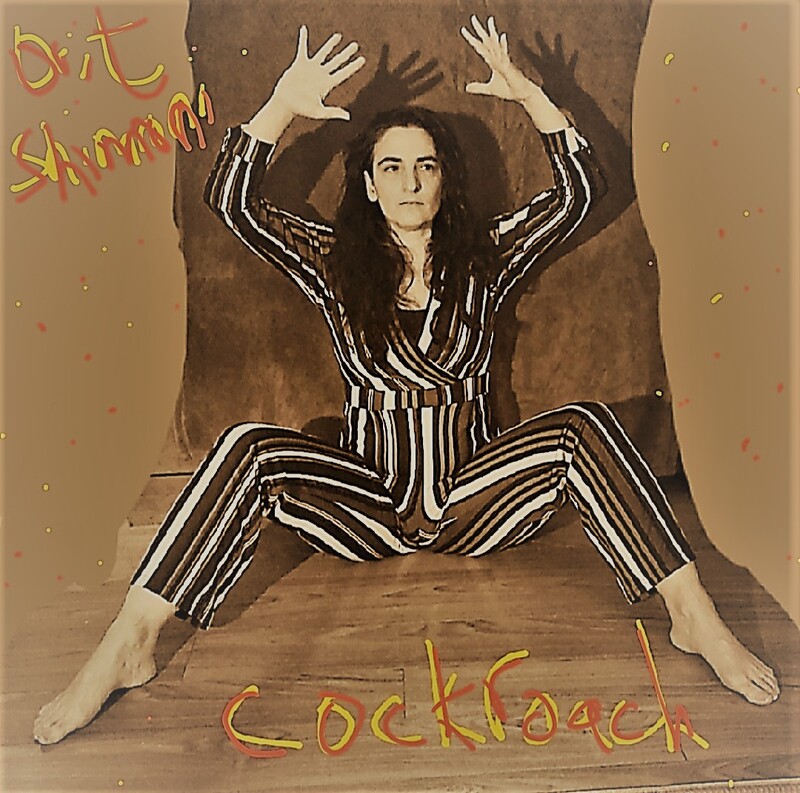 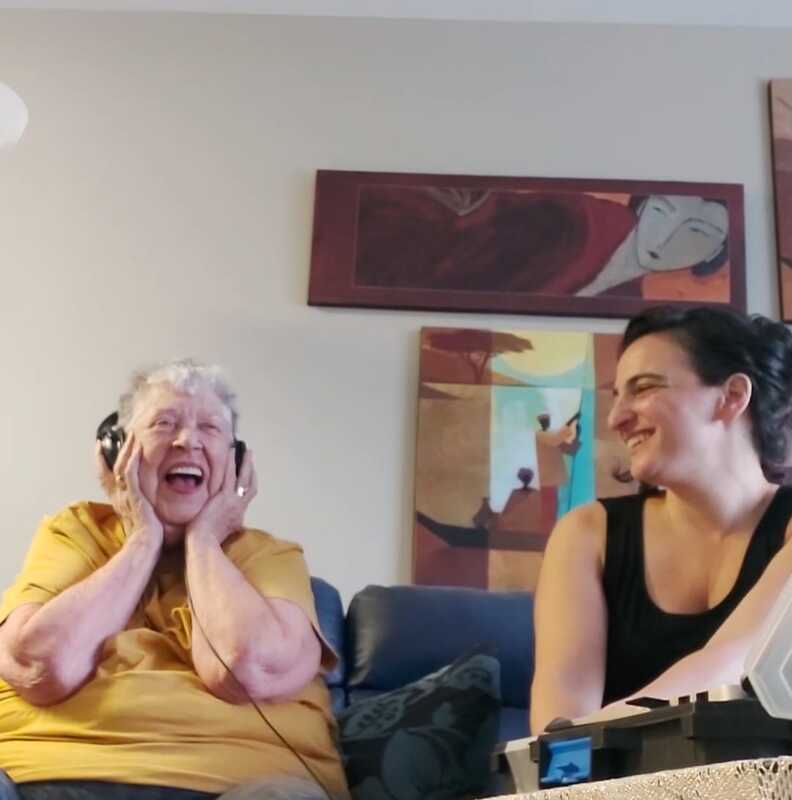 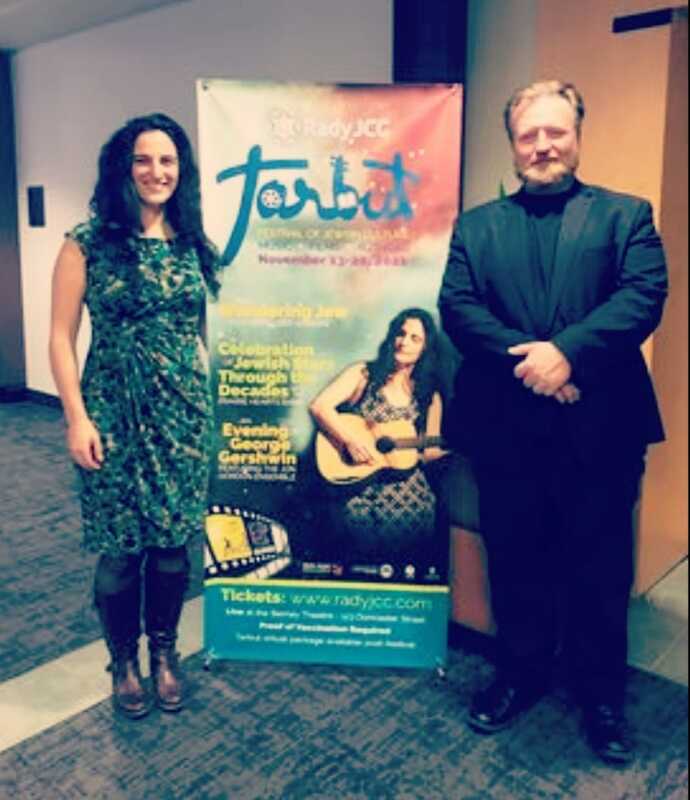 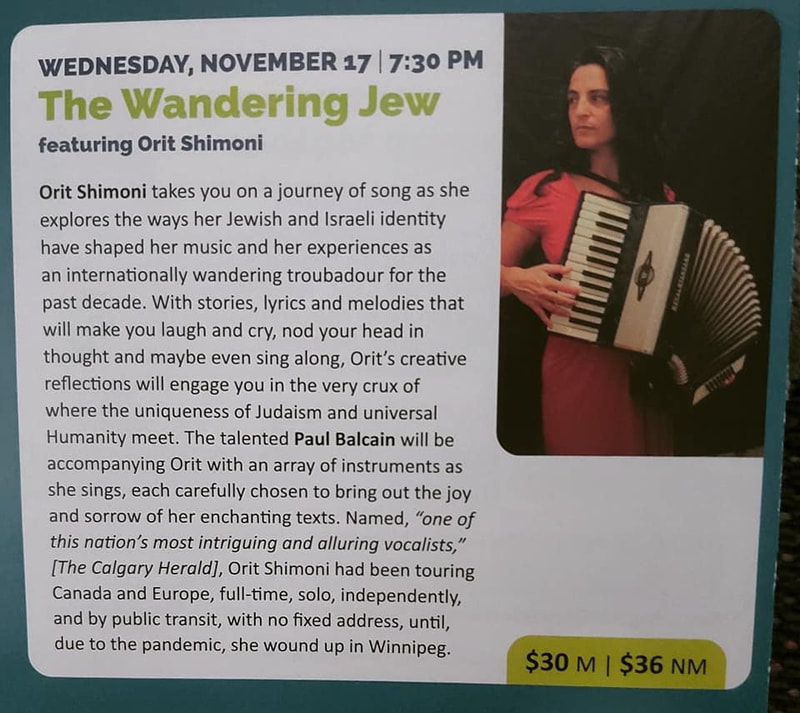 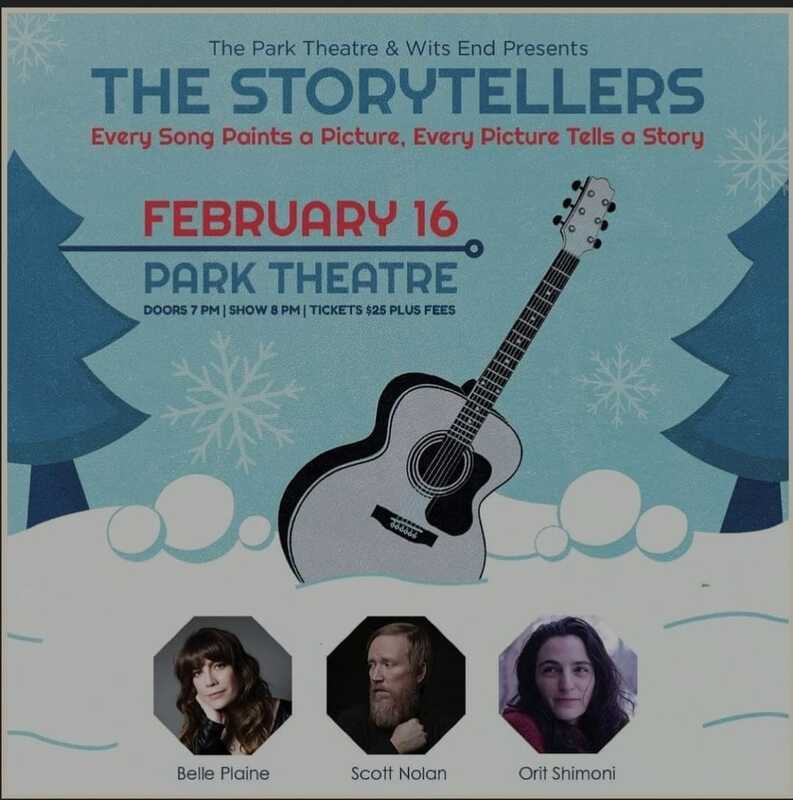 As some of us begin to emerge from the cocoons of this past year, some shows are starting to happen again.  To say I'm excited is an understatement.  For now, they are going to be in the form of living-room or back-yard concerts.  I'm trying to stay reasonably safe and keep my fans reasonably safe as data is still emerging and unclear, and as kids under 12 still can't get vaxxed.

For now I'm delighted to announce  the following events: